Polo is a sport played between two teams, on a 300 x 160 meter field, with goal posts on each end that mark the end goal.

How many players are on each team?

Each team has four riding players, which can be on mixed gender or gender specific.

What are the positions assigned to the players?

Players are assigned to positions according to the following responsibilities:

Player #1 is the most attack-oriented position, in charge of scoring goals. The player #1 generally covers player #4 of the opposing team. Facundo Pieres, from Ellerstina, plays the #1 position with a handicap of 10. The most important polo player in the world, Adolfo Cambiaso (h10) on the team La Dolfina also has the #1 position on the team.

Player #2 is backs up player #1 and defensively covers player #3 of the opposing team. David Stirling, on La Dolfina, with a handicap of 9, plays in the #2 position.

Player #3 is the leader in tactics and has to be a long distance hitter to get balls to the #1 and #2, while also serving as a solid defender. Pablo Mac Donough (h10) from La Dolfina plays #3 on the team. The #3 assigns the captain, and is generally the one that plans and thinks through the strategy of the team.

Player #4 is the principal defender. He can move around the entire field, but in general he tries to avoid getting too into the aggressive plays. The emphasis on defense by player #4 allows player #3 to take a more offensive role, knowing he’ll be covered if he loses the ball.

As polo is a sport with many movements and quick changes, players generally end up playing several positions but try to end up returning to their initial position.

What is the strategy of playing in a team?

Throughout the course of the sport’s history, players have adopted the control of the ball with short strokes. Today, this skill seems like magic compared to how players used to play historically. No one would have imagined that players would carry the ball “attached” to the mallet at such fast speeds, where the ball and the horse travel together at the same velocity.

The players base the game around not losing the ball, or making sure that the ball is always in the possession of their team, as opposed to previous strategies where the player only thought about hitting the ball forward as far as possible, whether or not anyone from their team was there to receive it.

Another recent addition to the game is the strategy called “blocks, curtains, walls” in which one player carries the ball and the rest of the team try to open his path and make sure no one from the opposing team blocks him. 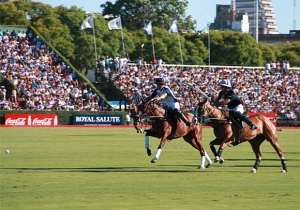 Over time the game has changed through various phases, from a 100% team sport where all members were a part of each play, to a game where individual plays began to take priority, and finally a game where one player controls the ball and the rest of the team work on his behalf.

How many substitutions can a team have?

During a game a player can be substituted for another only if he cannot physically continue due to injury or external forces. Any issue causing a substitution has to be analyzed by a judge who has the final decision.

In tournaments and games each team can add up to 2 subs (unless there is a special rule in the tournament) that can substitute for any position in the game if the need arises.